The problem is that it needs the version 6.1.0.0 of the MS libraries "mediacenter". But the version available on Windows 8.1 is 6.3.0.0. Configuring the adequate BindingRedirect fix the problem.

It works for me... both for the service and the configurator ;)
This is a workaround for those who don't want to move from MediaBrowser 2.6.2 to 3...

When an "unknown device" appears in the "Device Manager", it can be identified thanks to the "PCI vendor and Device Lists" webpage.

In order to get access from my HTPC to any movie or cartoon at any time (without feeling like a DJ), I extract the content of my DVD as MKV. Sometimes, with some DVD, I obtain several MKV for a single episode. In such case, I merge the MKV's in a single one. My favorite tools: MakeMKV and MKVToolNix (MKVMerge)

The Beta version of MakeMKV is always free. It's the most easiest tool I have tested to extract tracks from a DVD. Only a few steps are required to analyze and decrypt the DVD, list the content and extract it:

One MKV is produced by selected title. This MKV contains everything: not only the video and the various audio tracks of the title but also the definition of each chapters.

To merge MKV, I use a tool installed with MKVToolNix: MKVMerge. The process is also easy and straightforward:

By default, the various audio tracks and all defined chapters are kept in the output MKV.

Although the volume of Windows was still 100%, I recently had to push the volume of my surround system from 8 (as used usually) to 28 to ear the sound of movies and cartoons played on my HTPC.

The problem was Windows 8 did (mysteriously) lost the configuration of the speakers. They used to be configured as 5.1 and appeared to be now configured in stereo.

I recently tried to upgrade Media Browser from version 2 to version 3 on my HTPC. It was not a success because Media Browser 3 comes with a client part and a server part. If the server part is not running (locally on on the LAN), the client part can't run either. And the server part might not run on my HTPC because it may only start if the windows shell starts (it's not a Windows Service but a Startup Program instead) - shell that is not running on my HTPC as it has been replaced with Windows Media Center.

After this trial, I did re-install Media Browser 2. Although I would be quite surprised if that would be true, this is maybe why the configuration of the speakers went back to "stereo" instead 5.1 ?!

To check what was wrong, I had to close Windows Media Center using F4 (as not only it replaces the Windows shell, but it is also run without any "close" feature thanks to the option /mediamode).

I did call the Task Manager (CTRL-Shift-Del) and run a new Task: Explorer, to get a Windows Shell. I was next able to check the Sound System Properties.

The Speakers where configured in stereo. I did reconfigured them as 5.1.

Next, in the "Enhancement" tab of the "Speakers Properties" window, I did re-enable the "Loudness Equalization" and "Speaker Fill". 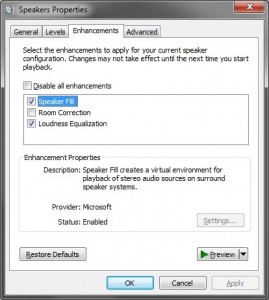 I did next log-off and restart a session. The issue was solved.

I will post the .Net piece of code I am using to open the "Print Dialog" asap. It's really the most simple one.

I experience the issue with a network Printer "Ricoh Aficio MP C5000". I didn't try with another model as all printers I have access to at my Office are the sames.

I looked for a solution to solve this issue without upgrading the network drivers or the firmware of the printer (as far as this could solve the issue as sometimes reported for HP printer) as I don't have the required privileges to do so.  Here is the trick I found:

Next, the “Print Dialog” opened immediately on all workstations where I did test the trick.

As soon as I re-install the printer as a "network printer", the performance issue is back… Notice however that the dialog window always opens immediately when called from, e.g., MS Office (Word, Excel, ...) whatever configuration mode I use for the printer.

Depending on the place where I was located at home, when trying to connect my Galaxy via Wi-Fi, I could got or not this infamous message "Authentication Error Occurred". I did possibly solve it by changing the channel of my access points.

My experience with this error message is that it really depends on the received signal(s) and possibly having several network with the same SSID.

I have 3 Wi-Fi Access Points in my house. All are configured with the same password and encryption (WPA2/AES), the same SSID and the same channel. This is creating a large and stable wireless network in the house.

But at some locations where I get either a poor signal or two signals of quite the same strength, I get the infamous "Authentication Error Occurred" message with my Galaxy SII (Android 4.1.2) just after enabling Wi-Fi. And I get this message whatever Access Point I am trying to connect from those locations.

At those very same locations, my laptop "Sony Vaio" (Windows

can connect without any issue, as well as my tablet "Nabi 2" (Android 4.0.4). Reason why I conclude it's probably an "Android/Galaxy issue" and not a "Router/Access Point issue".

My access Points are "Devolo DLAN 200 Wireless N". From security/encryption point of view, they only support WPA/TKIP and WPA2/AES. I tried both mode without success.

I also tried to use shorter password (minimum being 8 chars) without success. But I admit I didn't try to connect using WPS (which is supported by my Devolo and reported by some users on various blog to solve this issue).

I finally tried to completely disable the security/encryption. I did enable the MAC filtering instead. In that mode, the connections succeed really more often, but still not always. And there is at least one location where I can never connect with my Galaxy SII although I can with my laptop and my tablet: my bed

During my tests, I was monitoring the wireless signals using "Wi-Fi Analyzer", to be sure that the signal was kept "fair". So, loosing the signal for any reason is not presumed to be the issue either, especially as far as I was doing the same test (I.e.: I enable the Wi-Fi and wait for a connection) simultaneously with my Galaxy SII Android 4.1.2 and my Nabi 2 Android 4.0.4.

As the quality of the signal was "fair" and as far as I had no issue in most other locations with free Wi-Fi, I started to consider that the problem was possibly related to some small signal disruptions in my area.

Here in Europe, the frequency 2450 MHz is used by microwave ovens. Those could possibly disturb the Wi-Fi channels 9 and 10. But if your does, change it immediately ! Radiation that escapes from a microwave oven while it is in use may not exceed 5 mW (per cm2 at a distance of 5 cm ). So, if your experience Wi-Fi issues when using your microwave oven, the leakage radiation is probably exceeding a lot that limit (It happens as some of my colleagues already experienced). But I don't have any special device turned on when I do my tests...

Looking for more information about Wi-Fi signals, I discovered that frequencies from 2400 to 2450 MHz (Wi-Fi channels 1 to

are used by "radio amateur". Those could effectively impact the Wi-Fi signal as their radio signal goes up to 120 Watts while Wi-Fi is usually around ~18-30 mWatts. It would therefore be advisable to check within the neighborhood if anyone has such a hobby. This could likely be the case if the Wi-Fi issues are only experienced during certain period of the day (e.g.: the evening) or during the weekend.

I finally read that channels 1, 5, 9 and 13 are known to be used by some wireless transmitter and camera (at least here in Europe). As I don't have such devices, and taking into account the info about the frequencies used by "ham radio", I decided to use the channel 9 or 13.

Concretely I did switch from channel 6 to channel 13 on all my access points and could immediately connect flawlessly from all locations where I was experiencing issues previously. That being said, there are possibly some other locations still to be discovered where I will experience again the problem. But for sure, changing the frequency has an impact on the connection!