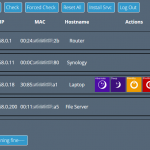 It installs a website that list all your network devices. Depending on the OS, you can possibly send a sleep, shutdown or hibernate command to the device. ACPI-On-Lan tries also to reach each device (using a ping) and checks if there is a default web page accessible on the device (Ex. a configuration or administration page). Finally, it can send Wake-On-Lan magic packets to wake-up devices currently switched off.

This package is a prototype made for learning purpose. I did test many development techniques and libraries I never touched before: ajax/jquery, boostrap, .Net click-once deployment, creation of Synology spk packages, WebAPI/Microsoft .Net Owin, Newtonsoft.Json, running shell commands from php, etc... So don't expect the most amazing bits out of there. It's just this well known Big Ball of Mud

This is not a beta version (even not an alpha), which would be well designed. My prototype is a Quick and Dirty App made of various pieces of code dropped together. It must be complete rewritten properly or at least deeply re-factored. Briefly said, I don't want my name to be associated with this ugly mess (even if most scientists seem to produce such a code :D).

Nevertheless, and although still really incomplete (as most prototypes), it works on my own NAS and I have already been asked to share it. So, here it is:

You will have to install the package 'inetutil' on your NAS. This is required to be able to ping the devices while not running as super user (i.e.: 'root').

The package 'inetutil' can be easily installed via the graphic interface "IpkgGUI" once IPKG is installed. And there are many tutorial on the web to install IPKG. If you are not afraid, you can try my own installation script*, described here ("IpkgGUI" is a graphical interface to manage IPKG packages. It is available as a Community Package for Synology on https://www.cphub.net)

(*) Notice that you can install the package "ACPI-On-Lan" first and than connect on your NAS via telnet. The script to install IPKG is deployed with "ACPI-On-Lan". Once connected, run: sh /var/packages/AcpiOnLan/target/application/service/installipkg.sh

If you want to be able to send Sleep/Restart/Hibernate/shutdown command to Windows PC, you will need the Microsoft .Net Framework 4.5. This service is not required if you only want to send WOL commands to Windows machines.

1) Download the package attached at the bottom of this page and install it manually via the "Package Manager" of Synology. 5 clicks and ~that's it~.

Manual Installation of ACPI On Lan

2) It can theoretically be installed on any volume (if you have several). 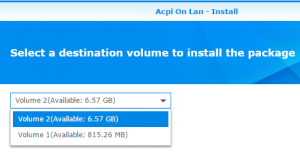 Install On Any Volume

3) And you can "run it after installation" 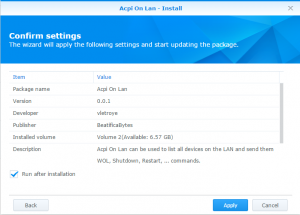 The setup of the package will mainly:

4) Once ACPI-On-Lan opened in a browser, you will have access to a menu "install srvc". Click on it to download the MSI which installs the Windows Service (Do this on Windows only!).

5) The download of AcpiOnLanInstaller.msi will most probably be blocked by your browser/antivirus as it's not a common download. If you want it, you have to accept the download ("Keep" within Chrome)

6) Once you run the msi, recent version of Windows will also prevent its execution

Once the msi is running, it will copy the required files and do a first run of the service. When the service is run interactively (it's the case when run by rom the msi), it install/uninstall itself instead of starting WebAPI Services. But it means that the antivirus will again react. Due to installation timeout this could disturb the setup...

Et voilà, the Windows Service should now be running.

IMPORTANT NOTICE 1: as the Windows Service was designed to be deployed via Click-Once, it was not assumed to be launched "As Administrator" directly (An exe "run" via Click-Once can by the way not require elevated rights). So, if run without such rights, the exe of the Windows Service will stop itself automatically and restarts "As Administrator" (You could be prompted to provide adhoc credentials). 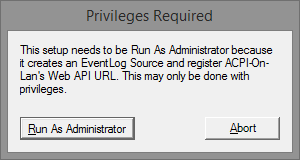 IMPORTANT NOTICE 2: when the Windows Service is installed via the msi, NEVER run the exe yourself from a command prompt of from the Windows Explorer. Again because the service has not been designed to be installed via a msi (with 'installutil' tool or with an installer class) a "self-installation/uninstallation" process has been foreseen if and only if the exe is run "interactively". So, if you run the exe after the installation of the msi, it will do a self-uninstallation of the service.You have to run it once more to reinstall it.

2) When you run Acpi-On-Lan for the very first time, it will search for your LAN (possibly one per Ethernet port on your NAS)

4) Finally, it will display a list of network devices found. For each device, you will have to "Set the OS" and "Set an Icon" (Except if you are happy with the default icons). 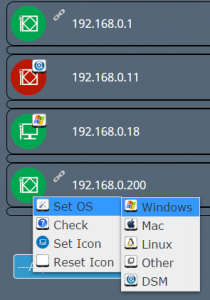 5) If there is an hyperlink symbol next to a device, it means that there is a we page available. You can click on it. Also to refresh the status of a device, you can use the menu "Check".

The recycle bin can be used to hide a device and you can edit the name of the device.

7) Finally, you have various menu

NOTICE: your devices will be listed only if they have been switched-on at least one and in touch with the NAS during that time (I.e.: if they have been added into the ARP table).  Some devices although switched-on are never in touch with the NAS. EX.: power lines Ethernet adapters, ... I will plan a procedure to ping all the IP in the LAN so all such devices are touched (if switched-on). In the mean time, you will have to ping them yourself from a telnet session. Ex.: ping -c 1 192.168.0.1