After reading quite a lot on the web to find a good IP camera that should be very well supported by my NAS (Synology), I want this one: a FOSCAM FI9826W White. 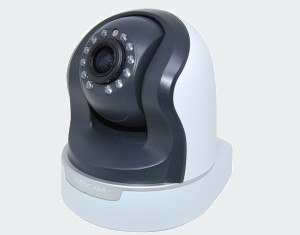 It's not yet officially supported by Synology and won't be available on the EU market before 1st of November. But it will be supported for sure IMO, as most other Foscam IP Cam are. So, I will wait until it's available to check that Synology does indeed support it. If they don't, I will take my second or third choice as I expect their price to decrease.

My second choice would a FI9821W (v2!). I did test the connection of my NAS with the demo cam available on the FOSCAM website. The connection works fine but after 2 seconds of playing, the video preview becomes blank. Foscam told me that it's possibly because I am not connected as an administrator... No answer from Synology yet on that issue.

My third choice would be a FI8910W. This one is not HD but reported by many users as working very well with Synology. I prefer however the FI9821W as it has a much better Web Management interface.

I found the best prices on www.redcoon.nl,fr and de.

EDIT 16/11/2013 Et voilà: my wife offered two similar IP camera for "Saint-Nicolas" (we traditionally celebrate that Saint by offering gifts to the "kids" :-) It is still more popular than Santa Claus, here in Belgium).

As the FI9826W is currently too expensive for my purpose, I bought two FI8910W.

The cheapest licenses to add one camera into Synology Surveillance Station are sold by “IooMobile” on eBay. They sent me the license key immediately by email (on my explicit request) and I got the licence card a few weeks later (from Honk-Kong to Belgium).