Trying to upgrade was always failing (without breaking my DSM, fortunately).

I initially thought it could possibly be due to the network Bond I did create. So I tried to remove it via Control Panel > Network. But it failed with the message : "Creating or deleting this bond is prohibited because the operating interfaces includes the cluster interface of Virtualization. Please shutdown these quests and try again: {0}. Creating or deleting the bond is prohibited because of abnormal status of Virtualization cluster, please go to Virtual Machine Manager see the details." 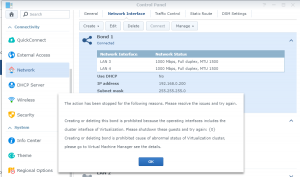 Based on this message, and since it was not installed anymore, I tried to reinstall the Virtual Machine Manager. Unfortunately, the installation was failing and the package was stuck in a "repair" status.

Being unable to 'repair' it by clicking on the "Repair" button, I tried to uninstall it. This was also failing, with the following message: "You cannot remove this package because this Synology NAS is a part of a Virtual Machine Manager Cluster. Please remove the host from the cluster to proceed."

Bref... I tried to 'erase' the package using my own Package Manager (See my SSPK server). It's doing something similar to the trick explained here to delete all files related to the 'Virtualization' package.

Once the package fully erased, I did reinstall it again but still without any success... And again it was stuck in a "repair" status and I was unable to uninstall it properly.

As I couldn't find any config file where I could see that my NAS was a member of a Virtual Machine Manager cluster, I tried to fix myself the installation of the package. I couldn't really fix it (I couldn't see which step of which installation or upgrade script was failing). But I have been able to force the installation to complete by deleting the file '/var/packages/Virtualization/installing'.

Next, the package Virtual Machine Manager appeared in status 'Installed' but 'stopped'. I was however able to "Start" it without any problem !! I could see in this Manager that my NAS indeed used to be configured as a member of cluster.

And, miracle (even without deleting the cluster), running now the upgrade of my DSM finally succeeded !!!

After the upgrade, I did remove my NAS from the cluster.