I couldn't find anymore where one can link Google Assistant with External Services in the Google Home App. Seems like Google changed the way to access the menu for that purpose in their App.

Select the Tab "Assistant" and in there, the "Home Control"

And here, you can click on the blue "+" at the bottom right.

And here we are:

Since I have defined several "home" structures in the App "Google Home", I can only add new rooms in the last one created.

Google Support told me that the only way to workaround that limitation was to delete all the homes, except the one to be completed, and re-create the others later.

First, let me explain why I have created several home structure in the App "Google Home": I wanted to grant my kids access on only a subset of the devices (lights, google home mini, chrome casts, blinds, ...)

So, I have created

I have shared each "Kid" home with its owner and the "Common" home with everyone.

Here is the standard way to add a room into a home when one has only one home (Thx to Thomas Ott):

The advantage of grouping the devices into rooms is that you can simultaneously turn all of them on/off by saying the sentence:  "Hey, Google: Turn off(on) the lights in <the name of the room>". If your Google Assistant in also assigned to that room, you can even skip the name of the room in that sentence.
But since I have defined several homes, when I want too add new rooms in the home "Main", they are news added into the home "Common".
I did contact the online support of Google to find how to do it properly. As always, they did their best to understand my specific case and suggest appropriate solutions. Unfortunately here, they could only suggest to delete all the homes except the "Main", add next the missing rooms, and then recreate the other homes. It seems that there is indeed no "feature" to add rooms into a specific home for the moment (Can you believe that ???).
Fortunately, I am hardheaded: I did search for an alternative to delete/recreate/reassign 10th of rooms/devices... and I found one. Using that workaround, I was able to create rooms in any of the existing homes.

A: if you have devices not yet assigned to any home, you can use it to create a new room into which that device will be automatically moved:

You can loop on this § A to create one room for each device not yet assigned.

B: if all your devices are already assigned to a home, use anyone to create a new room into which that device will be automatically moved and move the device back to the right room later.

Once the new room created, the device being now assigned to that room, you must move it back to its original location (or loop first on this § B to create all the new required rooms).

Notice that you can empty rooms by moving the devices to other rooms. But a device can't be removed from all rooms once it has be assigned once. This feature is also not supported...

I have just configured a Broadlink Mini R3 to be used within Google Home's scenario to control several devices. Works really like a charm !

It's just amazing that this little device can perfectly remote control my projection screen 7 meters away, the projector 2 meters away on the ceiling and the ampli which is in the room but not in sight.

Quick memo about how to configure them: 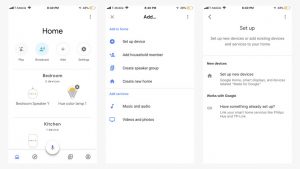 Using the "ihc" app, you can update the firmware: click on the RM mini > the three dot in the top-right corner > "Check for firmware updates"

Once an appliance added, you can reconfigure the buttons: click on the appliance > the three dot in the top-right corner > Learn

Don't forget to backup the settings of your appliances once reconfigured!!! It's the best ways to reuse them on other RM mini later: click on the appliance > the three dot in the top-right corner > Backup IR code sets