I did spent a lot of time trying to connect Smart/Cheap Ikea bulbs on my Philips Hue Bridge.

I finally found an easy way: use the Android App HueDynamic !

First, you must be sure to have Ikea Tradfri bulbs with a firmware >= 1.2.x

To be sure about the firmware of Ikea bulbs, no choice but buy the Ikea Bridge and at least one Ikea Remote, then connect the bulb to the Android App "Tradfri". If the firmware is obsolete, then the App can be used to trigger an update. But my experience is that even to connect the Ikea bulbs with their App, it's a real pain in t.... Also, before connecting next the bulbs to the Philips Hue Brige, you will have to disconnect them from any Ikea remote and from to the App "Tradfri" (Check here).

An option is however to check the batch id of the production, on the box. It is said that all bulbs produced with a batch id equal or above 1721 should have a firmware compatible with the Philips Hue Bridge.

Here a sample of Ikea bulbs with a batch id 1733. I bought 6 of those and had (nearly) no issue to connect them.

Once you have a bulb with adhoc firmware, turn it on and place it very close to your Philips Hue Bridge (less than 2 cm ;). The easiest for that is to use a cable like this one (I did one myself):

The bulb being on and next to the Hue Bridge, open the App HueDynamic and click on the three horizontal lines in the upper-left corner to open the menu. Then scroll down to the "Settings" section and pick the entry "Lights": 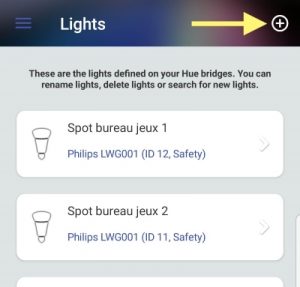 And select the option "With TouchLink" (This is the magic trick !!):

Now, press the "TouchLink" button of your Philips Hue Bridge:

The App HueDynamic will search for the bulb during 1 or 2 minutes... Once in touch with the bulb, this one will start to dim and bright several times before finally turning off. The App will continue to search for several minutes (for other bulbs) after that. When it stops to search, you see the bulb found on the screen. Accept it !

Notice that this process failed for one of my bulb (out of 6). I tried twice and got each time the message here under:

But when I came back to the list of bulbs, I saw that the bulb was actually in the list (Maybe I did something wrong without noticing ?!).

Since the bulbs are connected, I have been able to combine them into rooms and control them with Philips Hue Motion Sensors. They work great so far !

NB.: I read that Ikea remotes may not be used as once connected to a bulb, the bulb disappear from the Philips Hue Bridge... I didn't try that yet and won't ;)