It's well known that when a video does not play on a Raspberry Pi, it's usually due to a codec issue. But in my case, I was able to play video from the "Movies" menu but not from a "Smart Playlist". The problem was due to the amount of ram assigned to the GPU. It seems that there was no free resource anymore to play video once a "Smart Playlist" opened.

The problem was "Insufficient Resources". Googling on that I found a simple solution: add more ram for the GPU.

If editing the config.txt file using "telnet" is not easy, possibly "ftp" the Raspberry to "get" the file, edit this one on Windows and "put" it back.

Regarding the codec problem that can occur, it's usually for mpeg2 video as one has to purchase the mpeg2 license and configured the raspberry pi. See this blog for details.

For older RaspberryPi, with 256 MB of RAM, 4 splits are available:

New versions of RaspberryPi has 512 MB of RAM. You have 4 additional splits designed for this version: 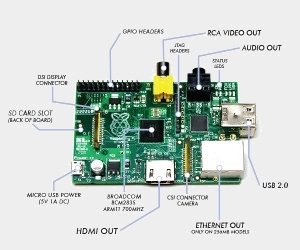 I have just received the "Raspberry Pi Model B" I ordered two weeks ago on "RS Components" website. It rocks !!!

Within 30 minutes, I was watching on my HD TV a 1080p movies streamed from my NAS :p

Mine is in a black case bought from RS components. I also bought there a power supply and a HDMI cable. The big advantage of using a Raspberry pi is that

As mentioned, I decided to install RaspBmc. It's really straightforward [EDIT: RapsBmc is now deprecated and replaced by Osmc).
The Android Remote Control for XBMC works really fine, as well as controlling XBMC with the TV Remote, which makes this HTPC from far the greatest for that price: ~35€!
A few notes:

site: http://www.raspberrypi.org (Look at the quick-start-guide and the FAQ)

The purpose: try if XBMC is compatible with the hardware of a PC before doing a full installation.

Tested on my Acer iDea 510 with success. Works quite well and could replace Windows 8 Pro with the Media Center Pack !