I wanted to replace the smallest disks of my NAS with bigger ones. Unfortunately, some packages where installed on those. To avoid uninstalling/reinstalling everything, I did wrote a shell script which does the job, as well as a Package for Synology to offer a web interface.

Here the first version of my script:

I did use it to move: AudioStation, CloudStation, DNSServer, NoteStation, PHP5.6, PHP7.0.

During the move, the package could temporary appear in the Package Center as needing to be repaired:

Simply wait until the operation is completed and click next on "Refresh" in Package Center. Also, check that no other service was stopped but not restarted !! Restarting other services with dependency is not (yet) managed by the script.

WARNING: Moving some packages resulted in troubles (Packages never able to restart). Ex.: Apache Http Server 2.2 and 2.4, the Node.js, Unofficial Java Installer, WordPress. These packages did not restart properly after being moved. I still have to investigate why, but they displayed the error "failed to run the package service" for ever (even after restarting the NAS). Something I known is that there are also Symlinks onto packages in /usr/local/. My script takes those into account. But there are possibly other such dependencies somewhere else ?! Most package could fortunately be returned in their orignal state very easily by moving them back to their original volume.

MariaDB. Before moving it, open it via the DSM main menu and change the volume where the DB files are stored.

If you wonder which package is on which volume, the easiest is to run this command in a shell: ls -la /var/packages/*/target

Node.js, FileBot-Node and the Unofficial Java Installer. I simply clicked on Repair to fix them.

Plex Media Server. during y first attempts, it didn't restart. I did simply install manually the latest version and the "update" fixed the problem without loosing any setting/library/etc... With the latest version of my script, the move succeeded.

If you find such config files, possibly update them by replacing the old volume (volumex) with the new volume (volumez) using a command like: sed -i "s/volumex/volumez/" <config_file_path>

Stuck ? If you can't stop/restart a service correctly and can update this one manually, then delete it via a console, Click next Refresh in the Package Center and reinstall it:

I did create a "Synology Package" to be able to move packages easily from the DSM. You can find it on my own Synology Repository (See Blog's menu "SPK Server"). You will find the script in the Package if you "unzip" it, in \package\ui\mvpkg.sh 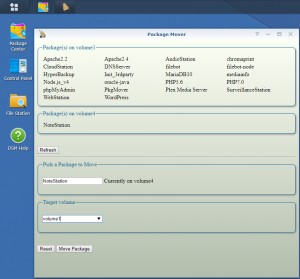 [EDIT 13-10-2017] I have added support in the package to start/stop/delete packages, display reverse and forward dependencies. Only delete a packages if you are screwed.
[EDIT 24-02-2018] The sources for my package are available on GitHub (named Package Manager). [EDIT 23-12-2018] Since a recent update of DSM, the feature to list dependencies between packages does not work anymore.

I got the following message when trying to install third parties packages on my Synology: "failed to install '...'. This package is not published by Synology Inc,

The solution is simply to Trust Any Publisher. 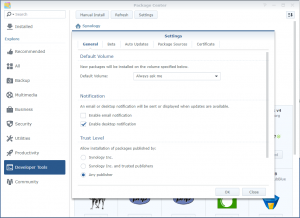 After reinstalling my Synology and trying to access various modules, I got web pages displaying "the service is disabled now". E.x.: for WordPress, phpMyAdmin, ...

The solution was quite simple: Go into the "Package Center" and you should see that the modules are stopped. Start them ;)

My OnePlus One being only used to play music via AirPlay, it's always plugged into his craddle. I knew this was not good for the battery life and started to look for an App able to prevent my mobile to reload as long as its battery was not less than a certain percentage. I found a paper recommending to reload only once the battery was lower than 25, but also recommending to no reload higher than 85%. And I found an App able to control this on many rooted android phones: "Battery Charge Limit".

For sure, only a full charge (100%) will provide the specified energy of the battery, and therefore its maximum runtime. So, one has to find a compromise:

All being linear, the life-prolonging mid-range of 85-25% reduces the energy to 60 percent.

More details on the App "Battery Charge Limit" on this blog.

My OnePlus One is already a quite old mobile, but I am still using it at home to play music. I recently reinstall Cyanogen Mod 13 and wanted to root it as this is required to use AirAudio. To avoid doing many manual operations, I looked for a fully automated toolkit and found "Bacon Root Toolkit".