Synology is reinforcing the security within its DMS, making more difficult the execution of scripts as root from packages. Here is my trick to do so based on the use of ssh and php.

Theoretically, to run something as root, a user must be a sudoer, i.e.: a user having the right to execute commands as root. It's not difficult to configure a user to be a sudoer. You simply have to add that user into a file located under /etc/sudoers.d/, with a few parameters to describe what he can execute and if he requires to type his password or not. Ex.: to let a user named "beatificabytes" able to execute the command 'shutdown' on a Synology:

The problem I have with this approach is that I have many various users (each package runs with its own user) and I don't want to define them all as sudoers.

One option would be to run all packages with the same user who is defined as a sudoer. This is possible via a privilege file to be added into the packages (/conf/privilege).

But if like me you want to always use the same administrator account, who is already a sudoer, if you have php installed on your NAS and if you have enabled ssh, then your could simply open a ssh session with that admin account, from a php script, to execute your commands.

Here is the php script I am using for such a purpose (saved into a file named 'sudo.php'):

And to call it, from a shell for example, assuming that your are using php7.3, type something like:

Installing ipkg is not difficult, but I hate to do it manually each time I (re)install a Synology... So, here attached is a script to install it automatically.

[EDIT] ipkg is not maintained anymore. Many packages do not run anymore with the most recent DSM. So, use opkg instead.

You can now use ipkg directly in a shell or via the (really) great UI named "IpkgGUI". This one is available as a Community Package from cphub.net. Add "https://www.cphub.net" as a Package Source in the Package Center's settings pane and install IpkgGUI. 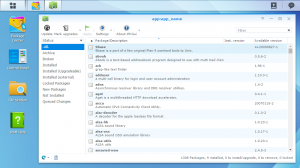 If ipkg is already installed, the script will remove it automatically and reboot the NAS before proceeding further with the installation (A reboot takes a bit more than one minute to shutdown and a bit more than two minutes to restart on my DS 713+). After the reboot, thanks to a script inserted into /etc/rc.local, the setup will continue automatically.

Automatic Installation of Ipkg With Reboot

(After the reboot, reconnect to the NAS). You can now check the status of the setup in its log, using the command: cat /root/ipkg.log. The output should looks like this:

I have just created a new shell script for my NAS. But its behavior is really weird. It seems that concatenating strings is actually overwriting them. Ex.:

Also, redirecting any output into a file results in a new folder and an new empty file, both with a weird name. Ex.:

results in a file named "outputFile" and a folder named "" ( beeing displayed as 'dots' in Windows Explorer!). Both are well located under /volume1/sharedFolder/ and visible in Windows Explorer. However the folder does not appear when executing 'ls -la' in a console on the NAS (only the file appears) and the only way to delete this folder is to execute 'rm -R /volume1/sharedFolder' in the console.

I quickly realized that this behavior was a consequence of creating the file on a Shared Folder of the NAS using the Windows Explorer's contextual menu "New">"Text Document"... Creating an empty file with the command "touch" directly in a console on the NAS does not suffer the same issues.

There is indeed at least one difference that I know between the file format of Unix and DOS: the return character which is 0x0A in Unix, while it is 0x0A, 0x0D in DOS (a.k.a /n in Unix and /r/n in DOS)

I realized that this was the issue because each empty line in the script was resulting in an error: ": not founde x:", x being the line number. Meaning that the "empty lines" were actually not empty (due to the /r).

Notice that the magic "touch" only works because I use next Notepad++ to edit the file. Indeed, this great freeware preserve the Unix file format while NotePad, WordPad, etc..., do not.

Otherwise, with the "Save As" of NotePad++, I would have been able to pick the right format: "Unix Script File" :)