Once a server is promoted to a DC, write cache is disabled by default. You can try to enable it, but it will revert back to disabled after a reboot. This is default and can't theoretically not be changed. It's done to protect the AD database as well as improve AD DC performance. There is however a registry tip that can force the server to keep that setting.

I did experience this on my Server 2010 Essentials which is out-of-the-box a Domain Controller. Although not impossible, it's not recommended to uninstall the DC feature from a Server 2010 Essentials. It's not easy and various features could stop to run (More info here and here).
The write-Caching was disabled after a reboot only on the System Disk. Not on any other disk in the server... I finally read it was the default behavior for servers with a Domain Controller and found tips here: 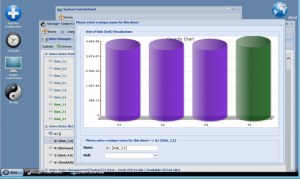 In the past, I have been using the onboard RAID controller of my Home Server's motherboard to secured its data, a RAID 5 with 6 HDD to be more precise. But I was in a urgent need for a new solution.

Indeed, I had several concerns:

So, I have decided to "upgrade" my Home Server with
For the Home Server Hardware part, including the case, see here.

For the Software part, I wanted to go with a Server 2012 Essentials because I really like

Server 2012 also supports pools of disks with data redundancy, a feature named Space Storage. But it has a several (big or not) disadvantages IMO:

So... What else ? I started to look for solutions to manage pools of disks or to manage RAID, or - better - to do both: Greyhole, SoftRaid, mhddfs, UnRAID, FlexRAID, mdadm, SnapRaid, Amahi, FreeNAS, disParity, LVM, JBOD, MooseFS, GlusterFS, ZFS, Liquesce... And I finally decided to go with FlexRaid although it is not free (but not expensive either):

To be honest, IMHO, the version 2.0 of this product is not yet ready for all end-users. They will have to be comfortable themselves with server engineering to solve various possible issues. Also, it seems to me that only one technical guy from FlexRaid is answering questions and offering support on the official forum. He knows very well his product, but still...

On my own, I had a lot of issues while testing the product - mainly because I did a lot of operations like creating/deleting pools, adding/removing disks, sharing/un-sharing folders, stopping/starting the service, etc... But also because Murphy was at the party: after many various issues followed by a complete re-installation of the server, one disk used to store FlexRaid's parity data started to die. If you intend to test it, I really recommend to do it in a VM with virtual drives that can be easily re-staged. FlexRaid has a Trial of 14 days.

Once the dead disk removed, FlexRaid started to run fine with the following "configuration" (as named in FlexRaid) - See Attention Points before create a new configuration:

To be safe however, and based on the amount of disk I have, someone from FlexRaid told me I should either use two PPU of 3TB or possibly add one PPU of 5TB. Doing so, I will double the security level (the RAID could survive after 2 simultaneous disk failures) while only loosing ~6% of space (1TB). For sure, RAID updates will be slower as 2 PPU will have to be updated. But based on my experience, it's really not that slower. It takes about 1 hour per TB of Data.
Here is a benchmark of accessing data in FlexRaid's pool configured with one 5TB PPU and 3x5TB DRU (And I got the same results for two 3TB PPU and 4x3TB DRU...) Clearly, FlexRaid with SnapShot mode does not really impact the performances... (Actually, one the Pool features has an impact). 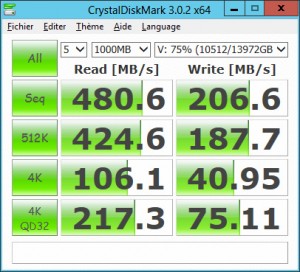 Here is the same benchmark for accessing data in an equivalent Pool with the Real-Time mode..; 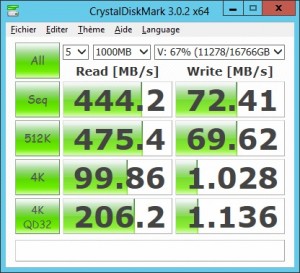 Writing small files is not performing well in Real-Time but that's due to the accesses to the FlexRaid Configuration Database (on C:\). If that drive is on a SSD, those performance should be quite improved (Support to store that DB on another disk is foreseen...)

For information: it took a little bit less that 13 hours to compute the parity for about 11TB of data in this 15TB pool.

I didn't succeed to connect to my Server 2012 Essentials through Remote Desktop until I remembered me that this one was set up by default as a domain controller, one of the major differences between this server and WHS 2011.

First, check that Remote Desktop is enabled on the server, just to be sure:

Next, I have disabled the Firewall, I don't need to allow Remote Desktop Connection as an exception in this firewall.

Finally, Windows Server 2012 Essentials being a domain controller, accounts created on that machine belongs to the domain defined at the end of the installation. So, the user name to be provided in Remote Desktop must be like <domain name>\<user name> instead of simply <user name> (equivalent to <remote machine name>\<account> as by default, Remote Desktop uses the target machine name as domain name).

This subtle difference between Server 2012 Essentials and WHS 2011 (which was not a domain controller) could be a source of confusions while trying to connect for "end-users" used to work with workgroups instead of domains.

I have always experienced issues to enable the support for Wake-on-Lan on my PC and again, today, I spent hours to succeed in configuring WOL on the Windows Server 2012 of my Asus Striker II Formula. But this time, I took notes for the future :)

I initially though that the default driver installed with Server 2012 for the nVidia ForceWare network adapters of my motherboard did not support Wake-On-Lan (as reported sometimes for other brand). But after installing the latest drivers from Asus website, WOL was not yet effective... All the settings of the machine were the default ones (issued from the installation) as I didn't touch any of them yet... So I started to enable/disable/reenable plenty of various settings before being finally able to remotely wake up my PC with a Magic Packet (I am using the "WOL" page of my Buffalo router for sending those messages).

First, notice that depending on the Motherboard, Wake-On-Lan could work for you only if your PC is in a Sleep mode or in an Hibernate mode. Mine can be waked-up from a full shutdown (as most recent/decent motherboards :) ).

I am using Windows Server 2012 Essentials (quite a replacement for WHS 2011 although not exactly) on my Home Server for File Storage, Media Sharing and centralized PC backups. I also plan to use it to run Virtual Machines.

However, I actually don't care about most of the "Server 2012" features. So, I "fine tune" the server to make it more user-friendly. I will keep track of the changes I do, and other useful tips, here (Edit: I found an interesting web site here to convert a server 2012 into a workstation, including a wizard).

Notice that I still don't see "Hibernate" in the Power Menu available from the Start Screen. It's only available when closing Windows from the Desktop with Alt-F4.

Next, in the Bios, you need to:

The Hibernate mode didn't run as expected although I am quite sure of the configuration based on my previous experience. Concretely, the PC does not power off. Only the screen becomes black. I have the same behavior with a Shutdown if the "Fast Startup" option is enabled - which is actually a Partial Hibernate. So, to investigate, I did type in a command prompt Run As Administrator: powercfg /a

This command lists all the sleep states available and the reason why they are possibly not supported. In my case, it did report that the Graphic card was an issue. Missing specific drivers for the graphics device, the OS doesn't know how to suspend and resume it. This is therefore disabling the hibernation (and would do so for other sleep states as reported by "powercfg /a"). CQFD. I found a version of Catalyst (for ATI graphic cards) that runs on Server 2012.. To be tested soon...

Notice also that if you have disabled an onboard Graphic Card within Windows because you did install another one, sleep states could also be disabled. Instead of disabling the onboard card, configure the display to be "disconnected" (Option of the Display > Screen Resolution).

Final notice: Sleep modes seems to completely set "off" one of the NICs.

The change will be effective immediately (No need to reboot).

Transferring a lot of small files is very very slow (a few KB/s instead of at least 80 MB/s for large files). This is due to latency... For such file transfer, it is far better to use FTP.
Once the service installed, a FTP site has still to be created

I don't use my Server 2012 as an actual Server 24/7 with Domain Control (centralized credentials), DHCP, Group Policy, VPN etc... Instead, I did configure on all my workstations to prevent them to be enrolled by Server 2012 Essentials when they access it for the first time.