In order to empty a volume of my Synology, I did move all shared folders from that volume to another. After this operation, I was not able to play movies anymore with Plex. I noticed that, although I was still able to browse the movies via my Plex Apps, the Plex Media Server Package was actually stopped and unable to restart. To fix this, I had to edit the path of plex’s library in the adequate config file.

Moving some “standard” Shared Folders used by Synology’s Packages didn’t result in any issue. Ex.: when moving the “music” folder, Synology prompted me to ask if it could stop properly the “Audio Station”. And once the folder moved, I was able to restart the “Audio Station” without any problem later.

But this wasn’t the case for the “Plex” folder. 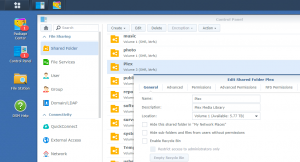 Opposite to moving the “music” folder, Synology didn’t stop here explicitly the “Plex Media Server” Package. But once the “Plex” folder moved, the Package appeared to be stopped anyway. And trying to restart it, the following error was displayed by the Package Manager: Failed to run the package service …

I found the following error in the log file using the command: cat /var/log/messages

What was weird, is that I was still able to browse the movies in Plex Apps. The reason was that Plex processes were still running as I noticed later.

To fix the problem, I did open a SSH Console using Putty, logged in as admin and went into root mode by typing the command: sudo -i

And did replace the old volume of the library (volume3) with the new one (volume1) : sed -i “s/volume3/volume1/” plex_library_path

Et voilà, I was next able to start the Plex Media Server Package.

I found here that using “QuickConnect” with Cloud Station, the traffic was routed through Synology’s servers, making it incredibly slow. In my LAN, it really accelerated as soon as I replaced QuickConnect by the local IP of my NAS or with a domain address resolved by my local DNS.

I found here the reason why Cloud Sync was slower than native Sync applications. The answer given by Synology is:

Could Sync is performing sync, it is heavy process, please see below detailed information from help:Why is Cloud Sync slower than other cloud services’ PC applications?

Due to the below limitations, Cloud Sync might take longer to sync files with public cloud services than the official PC applications such as Dropbox and Baidu.

Given the above limitations, the syncing performance of Cloud Sync shall continue to be enhanced, while also maintaining the safety and security of your Synology NAS.

DS currently does not control the sync speed, and does not have function to enhance it.

However, we will continue to try improve our service and product.

I have developed a Synology Package to move Packages from a volume to another. He suddenly became very slow when trying to display the list of Packages and Volumes existing on my NAS. I finally found that it was due to mount points not accessible and making the ‘df’ command not responsive.

In my Package, named Package Mover (See Blog’s menu SPK Server), I am using the command ‘df’ to list the existing Volumes. This is the one that was extremely slow.

To investigate the problem, I did display the errors of the System Kernel with the command ‘dmesg’ and found plenty of messages like ”CIFS VFS: Unexpected lookup error -112″

I also noticed that when ‘df’ was finally displaying results, there was no information about the volume1.

As by accident, I remembered that I did use CIFS VFS to recently mount some shared drives of a remote Windows Server, I checked if there was any issue with those. And there was:

I noticed how serious was this issue when my shell crashed while trying to autocomplete the name of a mounted folder:

So, I did unmount and delete all the subfolders, and the problem disappeared

Now, ‘df’ executes within a ms and lists all the expected information!

I did update my WebStation to the latest beta version. And although the option to “enable Display_Errors to display php error message” was disabled in the WebStation configuration pane, I saw warnings everywhere in my WordPress blog. No choice but erase the WebStation and reinstall it.

Errors were appearing although the option was disable both for php 7.0 and php 5.6.

Impossible to uninstall the WebStation as the Configuration Center see that various other Packages denpend on it: Apache2.4, WordPress, Apache2.2, phpMyAdmin.

Also impossible to downgrade by manually installing a previous version.

So, I had no choice but connect on my NAS via a SSH console using Putty and enter the root mode (with the command sudo -i) to delete the WebStation Setup :

I had to reconfigure the General Settings and Php Settings, et voilà.

Install first IPKG as explained here and, in the ssh console, run next as root: ipkg install git

You can also simply install it using ipkgGui. That’s even much easier than using a ssh console ;)

Now, you can use the command git in a ssh console…

Ex.: first thing you should do is to set up your name and email by typing:

To clone a remote projet, in a local folder,  type:

The URL can be found using the “Clone or download” button of any GitHub project (See “Clone with HTTPS”). 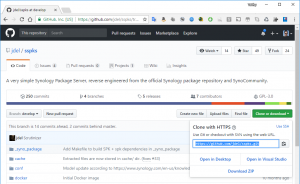 Documentation can be found here.

I did start an expansion of my main volume by adding 2 x 3 TB, 24h ago, and looking at the progress, it’s still 0%. But it seems that the display is incorrect. Looking via a console, on can see some concrete progress.

If I look into the Storage Manager, I see no progress:

To see some progress, try the following command in a ssh console:

I always forget plenty of details useful to work on my Synology, such as path, tips & tricks, command or service names, etc.. So, to retrieve them more easily, I will publish them here.

Connect on a Synology via SSH

So, concretely, the structure of a Package Folder under /var/packages/<Package name> is like:

NB: Sometimes, ‘target’ can be a link on -> /usr/local/packages/@appstore/<Package name>

If something goes wrong and you look for information, delete all existing logs (rm -R) and redo the failing operation. Next, look for newly created logs ;)

The Web server can be nginx, apache22 or apache24, as:

But also in the Web Station configs: